“It’s freezing and snowing in New York…where is global warming when you need it?”

That is an actual Tweeterbird quote from the American official on November 7, 2016 – USA Election Day. It starts the long term off right in its one of a kind transparently staged environment as the last scientific authority on global hilarity. Known for his first year in office as a worldwide laughingstock, Donald John Trump is the most tweeterific American leader to ever withdraw from the Paris Climate Accord. In a single bid to put “America First,” Trump inspires the world to brand stamp “America Last” on everything, from bumper stickers to this trendy global warming snowglobe. As the blonde bomb-naked doll stands freezing its globally warmed buns off while wearing its tighty-whities and standing in the center of a background scenery based on New York City’s empiresque skyline, this timeless keepsake will give many future generations laughs and hoots for years to come. Shake up world affairs and watch the #fakesnowfall fall, even though it’s hard to tell if it’s coming out of the sky or just dandruff falling off the top of this model’s stick-on hair. Use this globe as a paperweight or on a mantlepiece for a great conversation starter for people who used to think it was impolite to talk politics in mixed company. Now everyone on all sides of the room can have a common conversation with this gag birthday or holiday gift, accompanied by its own Trump-loving friends, fans, livestock, and even left-inclined far-righters. Its 5.5” height and 3.5” girth leaves no guesswork for the military doctors about its true height and weight, and this blonde-headed American prankster is a full hard-on hand job of sculpted lab work encased in polyresin, the best ‘alternative fact’ in glassware. 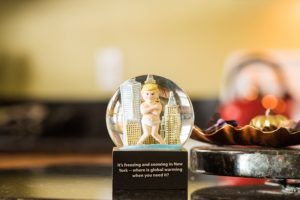