Remember how you used to have to buy two packs of buns for ONE pack of dogs? Now you can cook four buns and four regular-size or skinny kosher hot dogs or brats (not the cheese-stuffed ones, though) at one time. Or two dogs and two buns if you want the smaller pop-up. Even steven! (Yeah … It’s a mind trick, but it works.)All you need is tongs (don’t use your naked fingers, they’re hot!) and some chips and condiments and it’s good eating time. You can’t even overcook your meal or snack, because the toaster won’t go longer than five minutes. How cool is that? On first time use, burn the toaster in by setting on the highest grill number and let it smoke out like a Vegas Blackjack player, but after that it does fine – with grill marks on the dogs and everything, just like you cooked them outside. The buns don’t brown the first time in, but they’re crunchy enough. The dogs might split if you overcook them, more than six minutes, but it you’re like me – a split dog is a well done one. And to clean it, just do it like a regular toaster and slide the bottom drip tray out, then slide it back in after cleaning. Easy peasy. 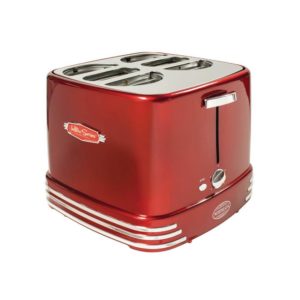 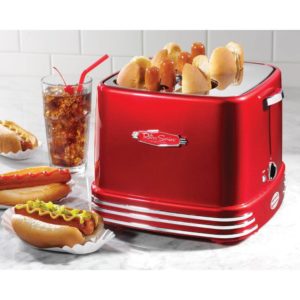