Never worry about children (or ‘older’ children) asking for seconds, the second serving is already in the dinosaur’s back. Whether it’s mealtime or a children’s birthday party, these Jurassic-themed holders are a walk-don’t-run instant hit. The dino-taco dish is 100% BPA-free, is made of food-safe polypropylene plastic, and adds some mean prehistoric fun to any meal time. It holds its own (holds on to its own), doesn’t become extinct in the dishwasher, and is just some plain old imaginative fun! Yes, it only holds two ‘Biceratacos’ crunchy shells, but it is still a three-horned beefy beast that is the epitome of table-time cuteness. Probably even holds more than two SOFT tacos at one time, or a couple of medium-sized burritos or empanadas – in fact, a whole pile of them if you fold the ends inside. You can also use them for sandwiches, but do not attempt salads, or soups. This prehistoric creature only likes food with bread and wraps. Watch dragging appetites magically pick up at the sight of these taco holders, and watch happy appetites hold their dino-dog up to ask for more. For children of all ages, three to 93, this W/E gift idea is a snack time treasure. 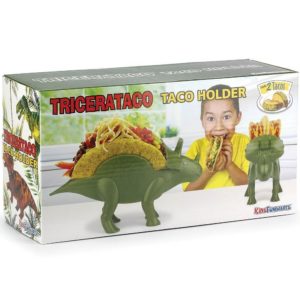 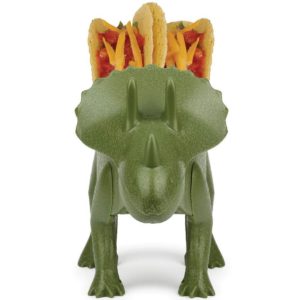